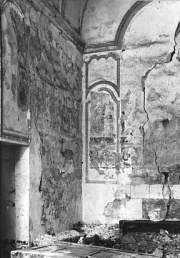 The "story" goes that one day in 1962, a teacher in the village of Retjons, Mr. Labidalle, attempted to escape the rain by taking shelter in a ruin, which we now know to be the choir of the chapel, and subsequently saw traces of old paint under the plaster.

It seems in fact, that this discovery was made ​​earlier by an engineer of the railways who was on track inspection duty; presumably, he informed the Societe de Borda.

In addition to decorating the chapel, the paintings served another purpose: to teach using images. For the benefit of illiterate parishioners, this early type of cartoon taught a religious history lesson and morality, by using (as you will see in the nativity scene, among others) some manipulation through the images.